Aimersoft Video Converter is the most easy to use video converter to convert video and audio between all popular media formats, including HD for portables.
$29.00 EXPIRAT
Părerea utilizatorilor: 320 (42%) 438 (58%) 0 comentarii 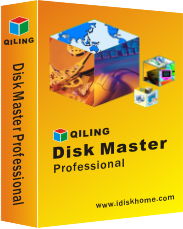 $39.00
gratuit astăzi
QILING Disk Master Pro 5.5
Secure and reliable - back up any crucial data and protect them in a safe way.
Mergeţi în pagina de descărcare

The Good
* Straightforward and easy to use.
* Does HD and SD video conversions.
* Does audio conversions.
* Can rip audio from videos.
* Supports many input and output formats.
* Has many predefined output "profiles" for electronic gadgets, such as the mobile phones, the PSP, and the XBox 360.
* Allows users to do some basic video editing, such as crop, trim, add watermark, add effect, and add subtitles.
* Can automatically split output files based on size or time.
* Supports batch processing.
* Supports drag + drop.
* Users can merge videos together.
* Allows users to automatically shutdown the computer after conversion.
* Adds an entry into the right-click context menu for easy conversions.
* Supports DirectShow files.
* Supports NVIDIA CUDA technology.
* Supports multi-core CPUs.

The Bad
* Does not allow users the option to opt-out/remove the right-click context menu entry.

#8 Naxilo - You may notice that all the products they review and award they are also selling. They seem to have an affiliate relationship with all the products they review. If that is how they pay the bills then that is their choice, but for a review site, it has to raise questions about the 10 selected products, and the lack of impartiality considering they have financial considerations in selecting the 10 best. It's not the best "in the world", but the best "we can sell you".

As usual, we have competitors spamming these comments with lies, in addition to pushing their products. Aimersoft Video Converter does support AAC and AC-3 audio, depending upon output format. Supports DVR-MS but not WTV.

Like so many offerings, the installation sucks, installing both Xvid and AC3Filter codecs globally, and it has the same incorrectly spelled context menu registry entry as other Aimersoft offerings.

People have been posting all sorts of nonsense about nVidia CUDA support. Aimersoft indicates which conversions can use CUDA. In general, it's the containers which are using H.264, which is the most commonly used implementation of CUDA transcoding. Netbooks and such are going to have crappy graphics cards which can't do much if anything with CUDA. The newest cards (nVidia Fermi line) have the best CUDA hardware.

For the people constantly whining and lying about ATI, tough. Hardware manufacturers necessarily have to do some software development, and nVidia has always done much better on that front. CUDA was available almost two years before Stream (beta CUDA SDK in February 2007 vs. Stream in December 2008). Three of the top five supercomputers in the world are using nVidia processors, none are using ATI. nVidia has had PhysX available for years. In a few months, high-performance tablet computers will be available using nVidia chips (purportedly much higher performance than iPads). The next version of Microsoft Expression Encoder 4 Pro for realtime encoding will use MainConcept H.264 CUDA-enabled encoders, not the version that also supports Stream. Oh, and the self-proclaimed video expert reviewer who's constantly posting completely false information and claimed that you can't encode VC-1, not only has that always been possible, but even the free version of Microsoft Expression Encoder will do it, along with capturing screen video, editing, etc. Nothing like the Pro version, but it's not bad for free.

I'm not going to say much else about Aimersoft Video Converter. A converter is a converter, it has a reasonable selection of formats with adjustable parameters, but it lacks some things which I would want, like WTV support, and installing AC3Filter is a deal-breaker for me.

Some general software-related things which may interest GOTD viewers:

Agnitum, a previous GOTD vendor, now has a free version of Outpost Security Suite which lacks some features of the Pro version.

WinAutomation has been posting updates.

StorageCraft ShadowProtect, my only recommended backup solution, has posted version 4.0.5 (ShadowProtect, ImageManager, and the ISO).

Microsoft says that all features of IE8 are still available in IE9, but that's only true under Windows 7, not Vista.

Intel Rapid Storage Technology 9.6 doesn't install correctly under Windows 7, at least the 64-bit version. You need to change the service to Automatic from Automatic (Delayed). Version 10.1 has so far only posted the drivers, which you need to manually install (Update Drivers, pointing to the extracted folder). All of the documentation everywhere says that my hardware supports RAID 5, but Rapid Storage Technology only offers me RAID 0, 1, and 10. Creating RAID volumes larger than the Intel RAID Option ROM supports works, you simply can't do anything from the ROM at startup.

There's a huge problem with S.M.A.R.T., which many people have run into. S.M.A.R.T. can incorrectly attribute an external condition, like high temperature, bad interface chips, bad data cables, etc., with the drive, and there's nothing you can do. I'm probably going to have to replace one of my new internal drives and use it as an external drive due to incorrect S.M.A.R.T. error codes from a bad data cable.

Please read the information from Aimersoft Studio before installation:

To get information on how to use Aimersoft Video Converter, please refer to:
http://www.aimersoft.com/tutorial/video-converter.html

If you have any questions about this Video Converter, please feel free to contact our technical support directly at: support@aimersoft.com

Readiness: Wellness monitoring
Readiness can assess how prepared are you to train and compete with a very short, evidence-based wellness questionnaire.
$1.99 ➞ gratuit astăzi

Shout Screen - Big Text Announcements
App allows you to convey your message to other people when its not possible to speak or shout.
$0.99 ➞ gratuit astăzi